Reflective Report on ‘Ethical and Moral Issues in Intelligence’ of Mark M. Lowenthal’s Intelligence: From Secrets to Policy.

Reflective Report on ‘Ethical and Moral Issues in Intelligence’ of Mark M. Lowenthal’s Intelligence: From Secrets to Policy. 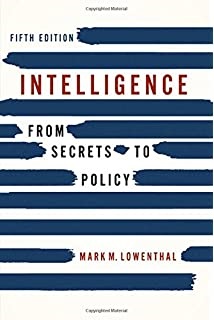 I was fairly cynical reading Mark Lowenthal’s writing. While his credentials as a retired Assistant Director of Central Intelligence for Analysis & Production make for the ideal intelligence-scholar pedigree, the bulk of his intelligence-community experience was serving in the American legislature. The intelligence and security-studies academics I appreciate the most, draw on practical collection and analytical experiences. They often allow their scholarly work to be shaped – but not necessarily informed – by their careers of pragmatic intelligence work abiding tradecraft best practice, government policy, and legal constraints. My cynicism and bias became most evident in the first paragraph of Lowenthal’s Intelligence: From Secrets to Policy ‘Ethical and Moral Issues in Intelligence’ chapter. In noting moral and ethical ambiguity, Lowenthal states “As with most discussions of ethics and morality, some of the questions have no firm or agreed upon answers.” Intelligence personnel should be instinctively driven to counter this by arguing laws and their subordinate national and organisational policies set clear guidelines for intelligence staff. In this reflective report, I reflect on Lowenthal’s ethics and moral-issues considerations from a practitioner standpoint.

Lowenthal wonders whether secrecy is necessary in intelligence, and if so, how much. The association of secrecy with moral issues seems somewhat poorly founded, and initially struck me as indicative of Lowenthal’s 20th-Century intelligence experience in the United States Congress. Contrary to Lowenthal, former Defence Intelligence Agency director Lieutenant General Michael Flynn in 2012 stated, “Ten years ago, when I served as an Army Corps G2, 80% of critical information was gathered through traditional intelligence. One year ago as ISAF J2, I relied on 80% open source information for campaign planning and 20% intelligence sources to provide richness and depth to the open source material.”[1] This anecdote of intelligence’s looser reliance on secrecy becomes more relevant as threats skew towards non-state and internet-based, over nation-states with secure-systems.

The need for secrecy also seems less obviously up for debate to me. Secrecy is primarily discretion as a protective tool, not Lowenthal’s suggested mechanism for self-importance. Secrecy surely protects our own advantages and disadvantages as well as whatever intelligence activities we conduct to improve both. Lowenthal’s subsequent debates I initially wrote off as naïve – all intelligence work is about gaining advantage for one’s state or organisation to better secure its interests. This reasoning applies as easily to a nation-state at war, as an intelligence service jockeying for relevance, or corporation looking to capitalise a concept into their own greater market share.

The chapter’s arguments then turned to the human costs imposed by the need of secrecy – edging towards broader thought on ethics and moral issues. This particularly struck me, fomenting a stronger argument around intelligence communities’ morality. When we question whether intelligence activity is compliant, the common refrain is to cite Snowden, Manning, or even Aldrich Ames for those with a longer memory. These examples – hailed as whistle-blowers or traitors – generally sour public opinions of intelligence personnel, who are often stereotyped as either ‘up to no good’ or treacherous betrayers. Lowenthal even suggests secrecy among other aspects of intelligence work, ‘might lower [intelligence officials’] inhibitions to commit questionable actions.’ I would question the context around these examples, however. In the year, Private (ret.) Manning breached military moral codes, approximately 1,433,150 security-clearance carrying American services members did not. Should one ethical breach mar the reputations of all the rest? Perhaps the less-biased, analytical approach to consider is not only those intelligence actors who breached convention but new intelligence recruits’ ethics and morals as they enter the profession. In comparing new entrants’ high idealism with the more cynical attitudes made public at the end of a career, perhaps writers like Lowenthal can better appreciate the overall ethical fabric and moral drive of intelligence-community members.

Often when the role of intelligence agencies is questioned by the Public and media, critics assume a lack of accountability, with almost no direction or control from elected leaders. To me, Lowenthal’s questioning of intelligence-agency leaders’ reports to political masters echoes this, including the NZDF’s own CDF and Chief of Defence Intelligence. Public discourse invariably demands accountability from intelligence agencies after perceived failures, as shown after the 9/11 attacks and more recently the Christchurch Mosque Shootings. These assumptions ignore that intelligence personnel and units are parts of a country’s bureaucracy – with all the hamstringing compliance requirements, planning, and consideration. Very rarely does greater scrutiny actually identify secrecy driving a lack of accountability in the Five-Eyes context. Bureaucratic inertia, like the siloing of information, is more likely named as a repeated driver of mistakes.

New Zealand has an interconnected intelligence-accountability system relying on two ministers, Parliament’s Intelligence and Security Committee, intelligence chiefs’ reports, the independent Inspector-General of Intelligence and Security, and occasional reviews. Those mechanisms’ access inside classified systems mitigates the lack of public access. In my opinion, two government ministers supervising the intelligence agencies is robust oversight manifested. Reviews, like the Ministry of Justice and Law Commission’s Review of the Search and Surveillance Act 2012, and the State Services Commission’s Inquiry into the Use of External Security Consultants by Government Agencies, demonstrate disinterested agencies acting as part of an overall accountability system. The former reviewing the legislation that enables intelligence operations, the later how agencies interpreted legislation and policy. Surely Lowenthal’s analysis would benefit from injecting his congressional-intelligence experience into ethics discussion?

When considering how each New Zealand government intelligence unit could proactively address Lowenthal’s concerns, I found myself comparing the differing legislation each agency works under. The New Zealand Security Intelligence Service (NZSIS) and Government Communications Security Bureau (GCSB) operate under the Intelligence and Security Act 2017, but other intelligence units, such as in the NZ Police and NZDF, do not. When combined groups, such as the multi-agency Combined Threat Assessment Group (CTAG), conduct their analysis, it is, in part, shaped by the different contributing agencies and their compliance requirements – in CTAG’s case GCSB, NZSIS, NZ Police, NZDF, Department of Corrections, NZ Customs Service, and the Civilian Aviation Authority among others. By having to meet the expectations and legal-compliance standards of several acts of Parliament, I would be more inclined to think public-service intelligence staff will meet the legal and moral requirements more easily than forgoing their groups’ norms to breach ethical standards.

As I processed Lowenthal’s analysis, I wondered more about the modern attitudes shaping the legislation guiding intelligence professionals. Alan Breakspear noted, “the activities of modern intelligence agencies, of intelligence collectors and analysts in a variety of organizations, are but the latest evolutionary stage of the collective intellectual exercise of brainpower[.]”[2] As creatures of the modern age, contemporary attitudes towards human rights, privacy, and the rule of law should be self-evident among this sector of public servants and service personnel. Though torture has not been eradicated, there is a significant difference between the racks and hot pokers of Sir Francis Walsingham’s interrogations and Guantanamo Bay Prison’s ineffective water-boarding techniques. Former CIA Director Michael Hayden later acknowledged water-boarding was no longer morally palatable.[3]

More broadly, I’ve found trade organisations also reflect the impacts of modern attitudes. The Strategic and Competitive Intelligence Professions group’s attempts to hold its private-sector members to a code of ethics with threats of “industrial espionage” for breaches. Competitive intelligence by virtue of serving executive-level clients inherently must comply with a business’s purposes, which 192 American executives redefined in 2019 as serving community and environment, as much as shareholders. This suggests even in commercially driven intelligence, ethics and moral issues are considered and articulated.

Separately, Roger Boesche’s analysis of Machiavellian thought,[4] and especially the use of ‘cruelty’ to reduce later violence, seems appropriate in considering contemporary attitudes towards privacy, morals, and ethics. Many activists argue it is immoral for intelligence staffs to breach citizens’ privacy rights. Intelligence staff meanwhile get frustrated being blamed when privacy rights have enabled malign actors to flourish. Edward Snowden’s revelation of mass data collection saw many label the National Security Agency as unethical. Yet the same style of mass data collection would likely have raised Brenton Tarrant and other right-wing extremists to NZSIS attention. Informing these issues through analysis would significantly enhance Lowenthal’s chapter as a guide for practitioners.

Lowenthal started turning my opinion of his analysis when noting, “Some people find it morally objectionable that relationships are forged with those engaged in activities directed against United States interests.” This reinforced Dr Rhys Ball’s point that human-intelligence relationships have always raised moral/ethical issues. Both highlighted intelligence collectors’ need to enter the domains threat actors operate in.

While critics can easily question such operations’ morality, rarely do we reflect on the ethics of allowing threats to fester or expand unchecked. Surely, as in Niccolo Machiavelli’s thinking the greater moral breach comes from states failing to ensure the greatest security possible for its people? At a more tactical level, I appreciated Lowenthal’s use of the term ‘distasteful prospect’ when discussing the occasions terrorists and others might aid national security efforts somehow. Like the lack of a right to not be offended, states cannot ignore security concerns because the means to counter them may be unpleasant. Raiding someone’s house and effectively violating their sense of privacy is distasteful, but would many criticise the drugs and weapons seizures?

Despite my cynicism, this reflective report has allowed me to generate greater depth when considering intelligence ethics. Lowenthal’s views will no doubt evolve in future editions of his book – especially given his incorporation of so many changes in the last twenty years. His disinterested opinions on the morals of intelligence personnel, I think, would be more convincing if he had been an intelligence officer, military or otherwise, dealing with 21st Century compliance legislation. This may just have to be a baton taken up by a future intelligence-officer-turned-scholar.