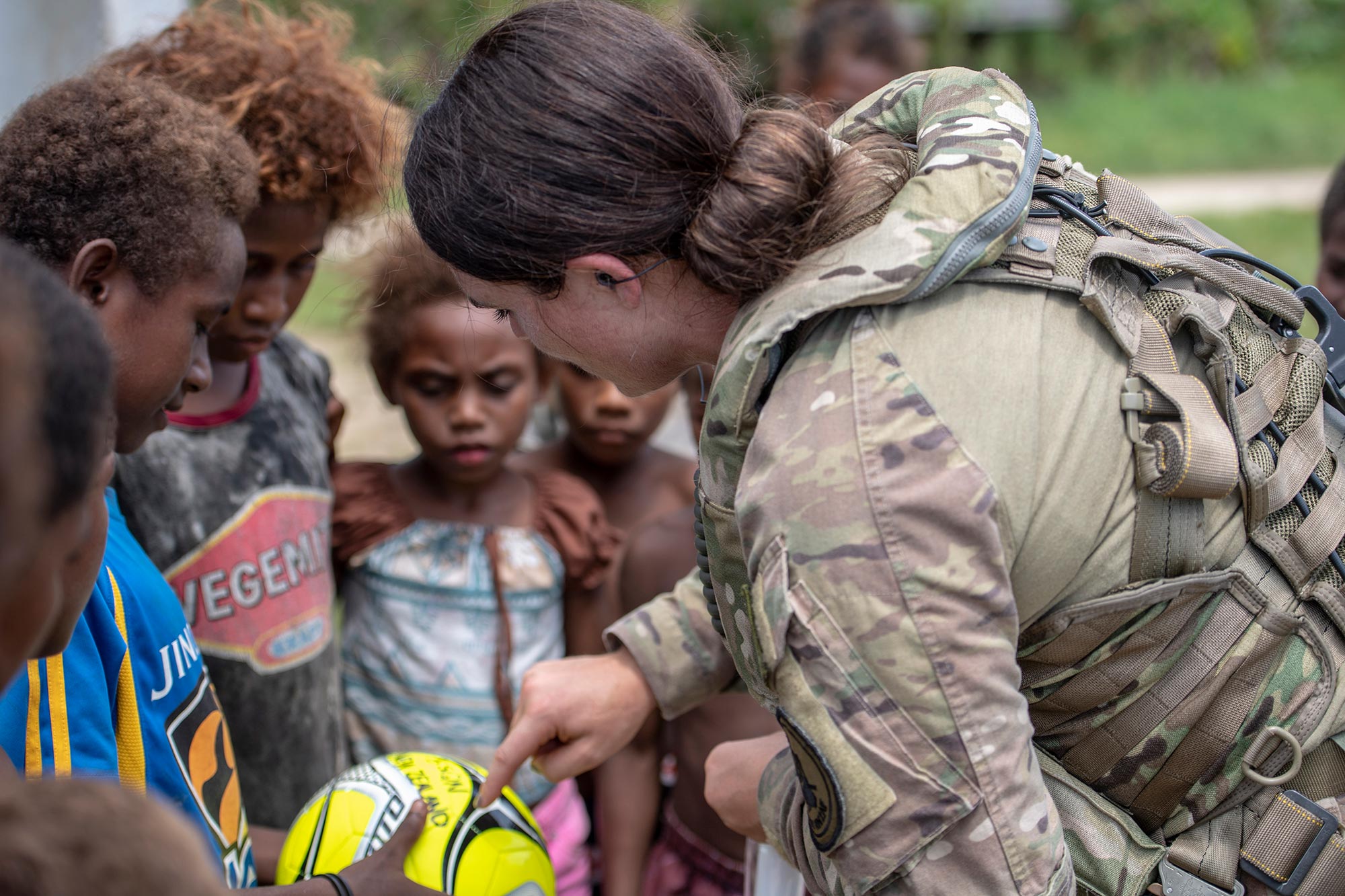 Have you ever felt you didn’t quite nail it on a mission?  That you didn’t leave the legacy that you hoped for?  That you missed something that didn’t make the real difference that you were striving for? Good morning, I’m Senior Sergeant Claire Bibby of New Zealand Police and my talk today is about the critical component of leadership that seizes opportunities to make a difference and I’m talking about unlocking the potential of UN Security Resolution 1325 Women, Peace and Security. This resolution provides a framework for nations to involve women in decision‑making about peace and security.  My talk will cover eight strategic interventions which could assist Police and military to connect and engage with women upfront, to normalise our communication opportunities with women and to recognise the significance of women and girls towards achieving our objectives. But first, let’s have a little bit of background to set the scene.  Resolution 1325 is implemented all over the world by way of national action plans for women, peace and security.  There are 64 nations with an action plan.  Australia has one and our small island nations of the Pacific have a regional action plan. New Zealand’s action plan is fairly new, it was taken to the UN Security Council in October 2015 and last year I was invited to the first Asia Pacific Regional Symposium on Women, Peace and Security as a result of my work with New Zealand Defence, Foreign Affairs and the Ministry for Women to develop New Zealand’s National Action Plan.

So, in Bangkok I met with 80 representatives from 17 countries to share lessons learned on the implementation of peace and security objectives.  It was acknowledged that some countries present were in military conflict with each other and they were asked to put that aside for the benefit of the wider conversation.

This table here provides an example of some of the influential people present.  You may recognise a few of the names.  Habibi Sababi was the Governor of Bamiyan Province for much of the time New Zealand Defence were there.  And Mosarat Quadeem of Pakistan is the Executive Director of a trust which uses the Quran “To work with mothers of radicalised youths, including potential suicide bombers who are being exploited by extremists”.

She said that as a result of the trust’s work, 1,700 young men had had their extremist attitudes turned around.

New Zealand’s presence at the symposium was welcomed.  Many of our international partners were there and you can see there was strong support for the work of Australia and New Zealand Defence and the gendered response planning during joint exercises. However, I was the only serving police officer and the only presence in uniform.  No other uniformed Police or any member of the Armed Forces was present. UN women informed me from their experience it had been difficult to motivate Police and military to attend and the organisers felt that perhaps some did not see the relevance of women’s contribution to peace and security.

So, here’s the first of my strategic interventions.  Utilise opportunities offered by UN women and others to develop your strategic relationships. Secondly, support our leaders to understand the benefits of engaging with women to secure peace and security. I really like this slide of New Zealand Defence getting it right.  It shows them working in partnership with other agencies, you’ve got the Red Cross there, and this is exactly what we’re talking about protecting, these women, children, people with disabilities and the elderly.  This is in Kaikoura last year.

So, 3 is to provide a gendered humanitarian response and by that we mean that we provide humanitarian assistance by consulting with women to ensure the needs of women and girls are met.  Very early in the symposium, attendees recognised that in the Asia Pacific region we have our own regional prospectors of causes of conflict.  So, it’s not just armed conflict but conflict as a result of natural disasters or the depletion of natural resources.  These are major issues resulting in a displacement of people and where there’s displacement of people, women are seriously marginalised.

Japan and Nepal were very strong on the need for a gendered response for natural disasters following their experiences in recent earthquakes and the tsunami. Nepal said that men were working away from villages when the earthquake happened.  Women were not protected in the evacuation centres and were sexually offended against. The Solomon Islanders talked about post flooding riots which occurred because of a lack of access to food, water and medical aid.

The women asked that in the future they are consulted about planning the evacuation centres.  For example, the need to separate men’s and women’s ablutions into different locations to prevent violence against women.  The men believed women were using the loos to fraternise with other men and as a result the women were beaten as a punishment.

And if we think Defence aren’t involved with moving loos, I have put that slide in of Oxfam New Zealand working with Defence in Nepal to setup where the latrines were going to be placed.

Number 4, engage with women in local communities.  As leaders, we need to ask ourselves the questions, are we deploying the right people internationally to consult with women?  When we deploy, how do we understand the needs of women and children?  How well do we connect with local women teachers, local Police and local medical professionals when we deploy?  They may have resources to provide relief.  They do provide a service to their own communities and being local know how their systems work or don’t work.

We can pre‑plan for a gendered response in our training.  For example, the approach of Australia and New Zealand in Exercise Talisman Saber was upheld as a success story in Bangkok.

Number 5, communicate with women politicians, not just the men.  The female MPs in the Pacific asked with equity in communications.  How would we do this?  These are my experiences from working in the Pacific.  Invite women politicians to be present for briefings and debriefings.  Ensure women politicians and their friends receive invitations to social events.  Find ways to establish legitimate meetings for events for the purpose of sharing information to women leaders.  Welcome, acknowledge and talk to women at functions and meetings.

There’s a whole website there explaining who our women are in the Pacific, who our MPs are, how many there are in each country and how you can get in touch with them.  There’s only 42 women MPs out of about 559 in the Pacific, that’s excluding Australia and New Zealand.  Some countries don’t have one at all, like Vanuatu.

Terrorism is also a confusing English as a second language expression which invites fear into communities.  I was trying to think of a similar threat here in New Zealand that invites such fear and I thought using the word “bomb” in airport conversations would probably do it.

The women said that Pakistan doesn’t recognise terrorism in their country, therefore it’s the civil sector, not the government, that’s working with women and youth for security and the word “peace” is not acceptable, so the word “talina” is used which means together.

Talina is an early warning system for men and women, girls and boys, to work together to identify early warning signs in young men being targeted to work for militants.  The women and the men present asked, why is that extreme violence against women and children is not recognised as extremism?

Use religion as an enabler for change.  Timor, Pakistan, Fiji and New Zealand all shared benefits of using religion and religious groups to achieve results.

WeatherWatch is an early warning weather system led by a Christian leader in Fiji under Femlink Pacific.  WeatherWatch is a vast network reaching across island groups alerting women of pending storms so they can prepare their families and villages in advance.  Communication is by radio and Radio New Zealand National has an important role but awareness was also raised that some religious groups and leaders are blaming natural disasters on women’s immorality and then excluding women from humanitarian assistance.

What’s our role in this situation?  How could we share information with WeatherWatch and Femlink Pacific to prevent conflict and save lives?

Of the 64 nations in the world with a national action plan, most will have a co‑ordinator for implementation.  So, I encourage you to look at the plans and identify where you can hook into them to get leverage at the strategic and tactical levels and use the report which is on‑line from the Asia Pacific symposium which lists the emails and phone numbers of men and women who are willing to guide and support Police, military and other agencies to make the right connections.

I will just run through these again.  Utilise the opportunities offered by UN women to develop strategic relationships; support our leaders’ understanding on the benefits of engaging with women to secure peace and security; provide a gendered humanitarian response; engage with women in local communities; communicate with women politicians, not just the men; focus on the outcome, peace and security; use religion as enable for change; and get active with those national action plans.

And just a reminder that we are responsible for the destiny of others.  The future of peace and security is communicating with and listening to the voice of women and girls.  For some, this will be venturing into unknown territory and may require intelligent and courageous leadership.  However, intelligent and courageous leadership achieves success.