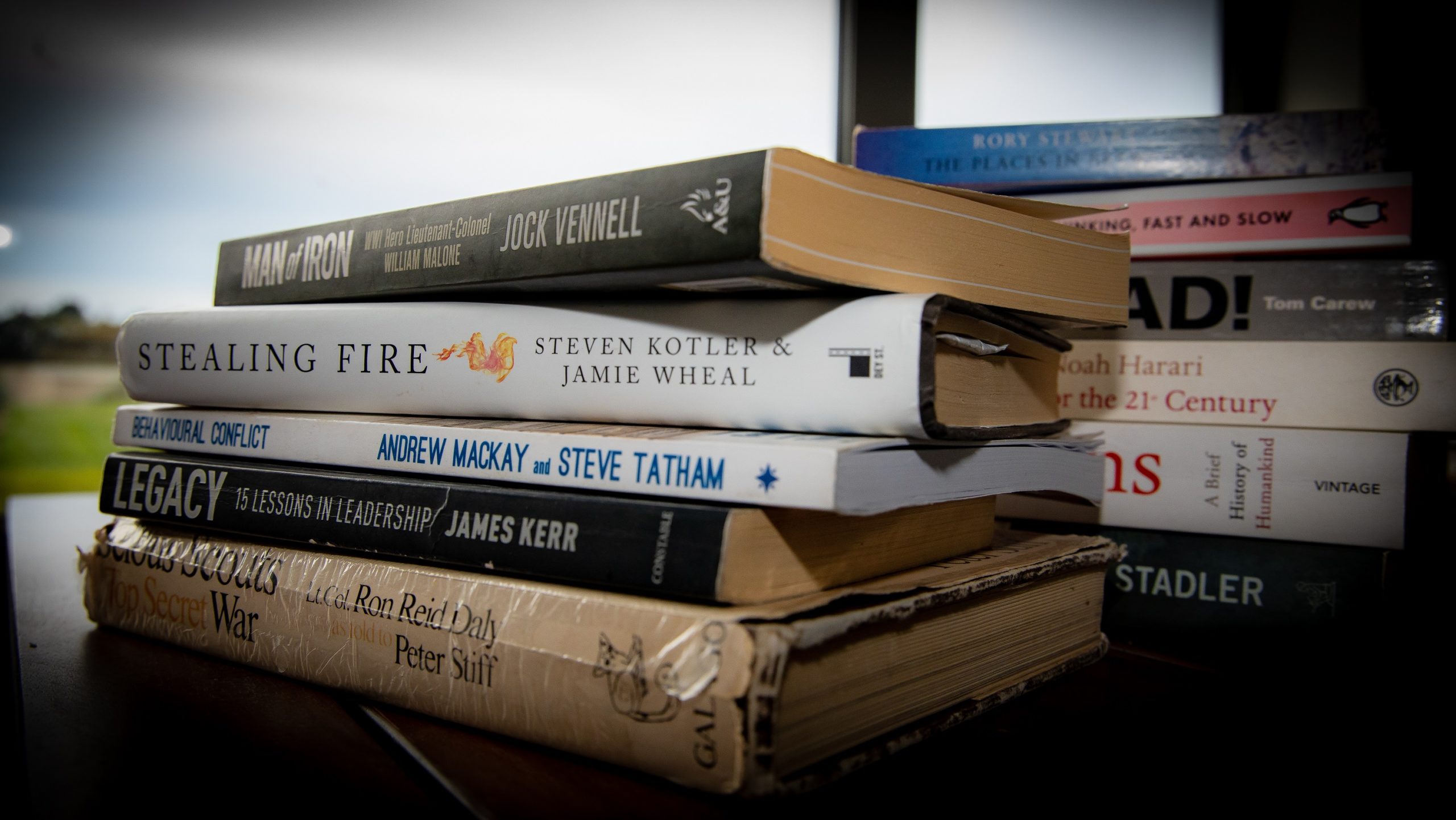 Reading Lists: Are they still relevant? What Should We Read?

The Christmas summer break this year provided a great opportunity to spend time with family and friends and recharge the batteries, and also to tackle the “to do” list that had been mounting throughout the year. Not the list that includes mowing the lawns, fixing the window latch, fixing the dog etc…but the list of books, articles, blogs (and podcasts and TED Talks once a millennial showed me how to get them off the interweb) that had accumulated; recommended or referenced by others; stumbled on in preparation for presentations, papers, or discussions; or been subliminally put in front of me by a Google, Facebook, Instagram, or Amazon algorithm. 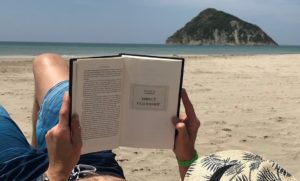 At Christmas, high on my ‘to do list’ was Callsign Chaos , the biography of Retired General Jim Mathis, co-authored by the excellent Bing West. A massive consumer of literature in his career, Mathis is very direct and on message about why, he feels, we should read; to develop our understanding of the Profession of Arms, to learn from others, and to prepare for the future. Good reasons, and when you look at the world though his eyes as a Marine, and as a commander from Platoon through to four-star General, and then U.S. Secretary of Defence, you can see how reading prepared him for the next level of tactical, operational and strategic command over a 40 year career.

The COVID-19 enforced isolation from workplace engagement and activities has, again, thrown up an opportunity to catch up, or potentially gorge, on outstanding or put to one side reading.
I read, and read a lot. For pleasure, and for knowledge about the profession of arms and the environment we operate in as a military. Reading, however, should not be a grind. Our formal training system, including promotion courses, Staff and War Colleges, and any graduate study, will prescribe enough reading of the historical and contemporary ‘classics’, to more than enough ensure a grasp on the nature and the character of war, the geopolitical environment, and, as most historians will tell you, a sense that in order to look forward in the this world, you also need to look back. A military zealot might read Clausewitz over a Jack Reacher novel, the Peloponnesian Wars over the Bourne series, but reading for enjoyment and knowledge requires balance.

Our reading (and writing habits) are also changing. Military history writing, war-time biographies, and future warfare used to be solely owned by academics and retired senior officers. That has changed, and so has the medium in which information is now sourced, analysed and presented. Books, articles, blogs and chatrooms are now dominated by junior commanders, journalists and authors who want you to see, feel, and understand what they are seeing at the intimate and tactical level, about individual and small group military actions from both sides of the two way rifle range, and set within a wider operational context. Even better still, they are written by ‘modern warriors’ who are combat-experienced, well-educated and articulate with a high level of critical reasoning.

The growth of “After Action Report” style writing; short, direct, and immediate, borne out of two (plus) decades of counter-insurgency operations where the situation on the ground evolved at a pace faster than training, has provided, largely through on-line forums, a wealth of information to assist those that are engaged in the current fight, those that are preparing to deploy, and those trainers looking to adapt to the next fight. This does not replace book-writing, official histories, nor excellent biographies and topical writing that forms the cornerstone of formal learning and the traditional ‘reading list’. Rather, it enhances it, keeps it contemporary and relevant, and in a time-pressured environment, quickly orients the reader to a situation, takes multiple perspectives, offers actionable advice, challenges our norms and adds diversity of thought and creative thinking.

So, with that in mind, does the reading list still have value to the modern soldier and the Profession of Arms? Definitely, I say, and for two reasons.
Firstly, viewed through the lens of our Leadership Development Framework. Just as we prepare leaders to step up to the next leadership level with hard and soft skills, our reading, and focused through reading lists, can also prepare us, through the eyes of others and their experiences, through a broadening understanding of the new tactical, operational and strategic environment, and through awareness of the command climate we will be operating in, for a smoother transition. This can assist us see new or wicked problems through perspectives of “there are many options and approaches to solve this problem” or “this situation is not dissimilar to one I read/heard about”, rather than applying a narrow solution or decision, premised on previous command tenures or experiences.

Secondly, the character of conflict is ever-evolving. A look at the Future Operating Environments, even out five to ten years, let alone out to fifty, points to a rapid pace of change. Our understanding and thinking, as individuals and as an organisation must keep up with this pace of change, lest we become overwhelmed by the quantity of information but at the same time a lack of knowledge about modern warfare’s new influencers like cyber, artificial intelligence, robotics, climate effects, and machine learning. Similarly, if we don’t think wide enough to possible future scenarios, including black swan events like the current COVID19 pandemic, we risk fighting with only the ‘last war’s’ solutions. A narrowly focussed reading list can do as much damage to creative and critical thinking, becoming dogma at the expense of understanding.

So what to read? The NZ Army has not published a suggested reading list since 2009, albeit a very comprehensive one (http://reference/army-publications/Reading%20Lists/Forms/AllItems.aspx). Don’t panic, many of the books are still relevant. Further, there are plenty of reading lists that have been published by our partners and allies, and better still, as evidenced by the list proposed by Maj-Gen Mick Ryan at the United States Military Academy (https://mwi.usma.edu/war-books-major-general-mick-ryans-2020-reading-list/), they now include a number of websites, podcasts and other resources that are relevant to our development of the Profession of Arms.

For Knowledge.
• Makers of Modern Strategy: From Machiavelli to the Nuclear Age – Edited by Peter Paret (Concise analysis of strategy throughout history).
• The Oxford Companion to New Zealand Military History – Ian MacGibbon (A starting point to understand conflict that has shaped our unique military history and culture).
• Small Wars Manual – United States Marine Corps 1940 (Bedside reading for all US Marines, many of the lessons of late 19th century still hold true in contemporary operations).

For Understanding.
• Learning to Eat Soup with a Knife: Counterinsurgency Lessons from Malaya and Vietnam – John A. Nagl (Critical look at counterinsurgency operations in Malaya and Vietnam and the price of not being a learning organisation).
• On Killing – Lt Col Dave Grossman (Released in 1995, a pioneering piece of literature about the psychological cost of war).
• The Accidental Guerrilla: Fighting Small Wars in the Midst of a Big One – David Kilcullen (Counter-terrorism and Counter-insurgency based, it makes the case against heavy-handed Western intervention in conflicts).
• After the Prophet: The Epic Story of the Shia-Sunni Split – Lesley Hazleton (a readable and compelling narrative that describes the rivalry between the two branches of Islam).
• Primal Leadership: Unleashing the Power of Emotional Leadership – Danial Goleman, Richard Boyatzis, Annie McKee (the power of EQ in modern leadership).
• Wired for War: The Robotics Revolution and Conflict in the 21st Century – P.W. Singer (full of tech, but also hits the difficult issue about AI and Robotics ethics on the modern battlefield).

For Fun.
• Flashman (series): George MacDonald Fraser (Fiction, but meticulously researched and sets the lead character in the key battles and conflicts of the 19th century).
• 7 Deadly Scenarios: A Military Futurist Explores War in the 21st Century – Andrew Krepinevic (released in 2009, with a chapter on Pandemics, a look at seven Black Swan scenarios).
• The Killer Angels – Michael Shaara (A two-sided fictional portrayal of the Battle of Gettysburg, its key commanders and actions, and the basis of the movie Gettysburg, 1993).
• Shackleton – Roland Huntford (A gripping yarn about exploration, leadership and resilience that should be fiction, but is 100% history).

If my bubble has Wi-Fi, regular articles/feeds from the following websites are also valued:
• War on the Rocks
• The Cove
• Wavell Room
• Grounded Curiosity
• Modern War Institute
• Doctrine Man
• The Atlantic
• The Economist
• And K.E.A of course!